The secret of Ms Dorobeth

For the purpose of filling out an in-development site with placeholder data, I decided to make a random name generator based on Markov chains. The goal was for it to create pronounceable and plausible names, but not necessarily real names.

First, a bit about Markov chains. If you have a set of "states", a Markov chain simply describes the probability of moving from any state to any other state. For example, imagine we have a mood lamp which changes colour every second according to the following Markov chain: 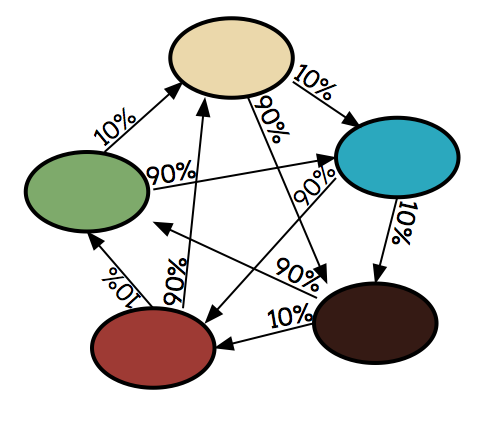 Markov chain for a mood lamp 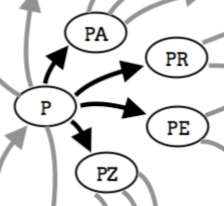 There is also a special 'letter' which indicates the end of a name. I'll call it "$". For example, "PATRICK" would have a non-zero chance to jump to "PATRICK$", which would mean our name is complete and that our name is "PATRICK".

In order to choose suitable probabilities, I downloaded the results from the US census of 1990 and trained the Markov chain on them.

To demonstrate how I trained the chain, let us imagine the census only contained the following 5 names:

In a similar fashion, we assign "M" to "MA" as ~67% and "M" to "MI" as ~33%. This means we won't generate a sequence of letters which isn't seen in real names. Jumping from "M" to "MQ", for example, has probability 0 here because it is not a sequence which is in the source data.

When training the Markov chain, I decided to use only the previous two letters to inform which letter to pick next. For example, "...HA" can go to:

Where "..." represents any sequence of letters. Since I'm only using the last two letters to decide which letter to pick next, even though "SHA" is always followed by "R" in our source data, "SHAE" could still get generated. If you could only do sequences which are seen in the source data, you will always end up with a real name, whereas I want to be able to generate a large number of plausible names from a potentially small sample set. I'm essentially encoding the rules of what is and isn't a valid sequence of pronounceable letters in the Markov chain.

If we do this for first names and last names separately, let's see what kind of output we get:

There are some real names (like "DAVID"), but mainly we have lots of exotic names. Let's look at "DOROBETH HOLDS". How does her first name get generated?

"DORO" can get produced because "DOROTHY" exists in the census. Then, from "RO" (the last two letter of the name), we can jump to "ROBE" (for example, in "ROBERTA"). Likewise, from "BE" we can complete "BETH".

This is a bit like how parakeets talk. Are the brains of birds Markov chains? Are ours?

You can look at a list of randomly generated names here.