This weekend I participated in a game jam with some colleagues from work. Our theme was Small World, and each of the six of us took it in a completely different direction. We had a shooter, a puzzle game, a humerous concept, 3d tech demos, and from me, a digital board game. In terms of engines: Unity, Unreal, SDL and LibGDX were represented. 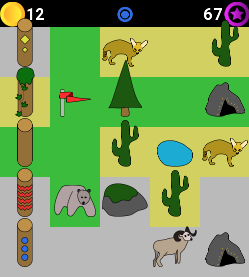 This is an example board from my entry: a board game for four players, made in LibGDX. It's called Square World. The game lasts 25 rounds, in each of which players bid on a set of tiles, adding one to their worlds. Each type of tile has a different scoring mechanism. For example, animals give you points based on the size of the region they are inside. I've played three times now, and despite not having won a single game, I'm really enjoy playing. Certainly, I'm proud of the game!

The experience certainly motivates me to try and spend more weekends working on my other games, as it shows how much can be achieved in just one weekend of graft. This is the fourth game jam I've done, and I think Square World is my favourite so far. My previous jam game was fun, but a bit niche and difficult to get into.

One of my favourite mechanisms of board games is when players dynamically assign values to resources, and psuedo market forces come into play. That certainly happens in this game, with prices fluctuating from round to round. And of course, it seems to be a given that whenever the piece I desperately need appears, I have no money left.

I am aiming to make a single player version of the game, and stick it on mobile. I think it is the kind of game that would be fun to play on the tube to work!

Edit: I've now finished the mobile version of the game, go check it out!