Here is a snippet of me aaahing twice. What do you think their relative pitches are?

To me, the first sounds deeper than the second. However, according to a pitch detection app I downloaded, they are both the same pitch (roughly A2). Why is this?

A sound is made by vibrations in the air over time. Looking at the soundwave up close, we can see this more clearly. The x-axis is time, and the y-axis is how much the air is vibrating at that point. The soundwave looks erratic and we can't pick out patterns.

To make a soundwave easier to analyse, we can use something called the Fourier transform. This allows us break up the soundwave into a set of sine waves which, when added together, recreate the original wave. This is useful as sine waves are very well understood.

In the example above, the original soundwave in red is recreated by combining all of the sine waves in blue.

For each of the constituent sine waves, we can calculate its frequency and its amplitude. The frequency is the distance between the peaks of a sine wave, and the amplitude is the height of the peaks. We can present all of these frequencies/amplitudes in a spectrogram.

In a spectrogram, time runs along the x-axis, frequency is plotted along the y-axis and amplitude is plotted by colour. Low amplitudes are in blue, whilst higher amplitudes move towards red. Here's an example spectrogram of two different notes. 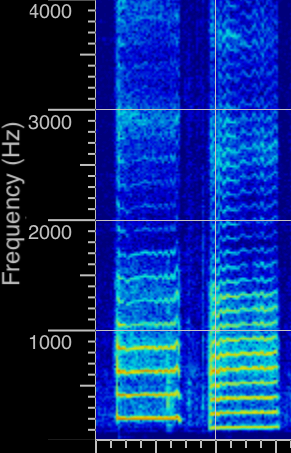 Pitch is determined by all the frequencies highlighted here and the gaps between them. The lowest frequency highlighted (at the bottom of the graph) is the fundamental tone. All the others in the same column are integer multiples of this frequency (220Hz, 330Hz etc.), and are called the harmonics. The pitch is determined by the fundamental tone, whilst the amplitudes of each of the harmonics determines the timbre.

A higher pitch's fundamental tone would have a higher frequency, and so the gaps between the highlighted frequencies would be bigger. Using that information, can you tell from the spectogram which of the two notes is higher?

Going back to the original aaahs, here's the corresponding spectrogram: 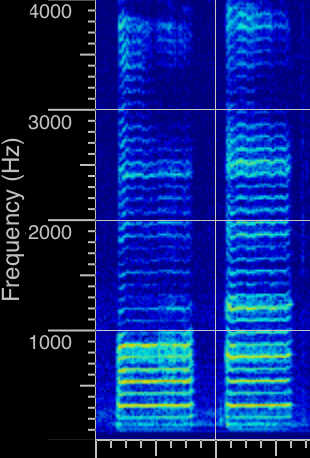 From this, it's clear that the same frequencies are emphasised in each aaah. This means they are the same pitch. In the second aaah, however, the higher frequencies have larger amplitudes, and this is why it sounds higher pitched to me.

I have really enjoyed learning this little bit about music. It was all inspired by a couple of Meat Loaf's songs. Reading a forum which discusses the singer's vocal range, I learnt that in Hot Patootie Bless My Soul (from The Rocky Horror Show), Mr Loaf hits a high note of B♭5. Whereas in Not a Dry Eye in the House he only hits A4. All this said, to my ear the latter sounds much higher pitch, and yet even after investigating and learning about harmonics and frequencies, I still can't make my brain hear the truth...