I really like the elegance of cryptic crossword clues, and a little hobby of mine is trying to come up with them. I have attempted to devise a relevant clue for each blog post I write; that's what the weird phrase after the date of each post is. The clue aspires to be relevant to the post, so there is an additional hint in the mix, but that shouldn't be necessary for solution.

If you're not familiar with the cryptic clue, the key elements are:

As an introduction, let's solve the clue for this post together: Fox goes wild in ale (8). The clue paints a clear picture, but don't be fooled, it's not related to the actual answer at all! 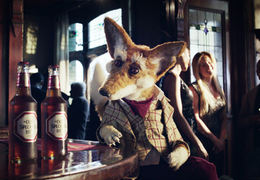 Firstly, we need to identify what constitues the definition. This is usually found at the start or the end of the clue, so we might be looking for something which means "fox" or "ale" and is 8 letters.

Then, the rest of the clue would be the word derivation. Either we get "fox" by "goes wild in ale", or "ale" by "fox goes wild in". I'm going to skip ahead a bit here and tell you that it's the former! In reality, you would have to play around with both.

There are some common tricks which are used that you need to be aware of. For example, "wild" (or any word meaning messy, disordered, drunk etc.) is a word which can indicate that there is an anagram for the answer next to it. However, the answer is 8 letters long, and the words around wild ("goes", "in ale") are not long enough. This is a red herring, therefore.

Another possibility is for "in" to mean that you place the thing before it inside the thing after it. Let's try that with "goes wild in ale". For example, we could put "wild" inside "ale". This is only 7 letters though, so we might have to swap one of the words for a synonym to get to the requisite eight. Beer can mean ale, and it gives us an extra letter, so let's put "wild" inside "beer": "be-wild-er" = "bewilder".

The definition, "fox" made us think of the animal, but it can also mean to bewilder when used as a verb. Now we can make sense of the whole clue:

Fox (definition, to bewilder)
goes (the following is how the word is derived)
wild in ale (put wild inside ale, or beer, to get be-wild-er)

One of the things I like about cryptic clues is that once you've found the answer, you can be confident of it because both parts of the clue have aligned.

If you've made your own clues, then please comment them!