This is now the third post I write about Square Worlds, and it's not going to be the last. Bear with me.

Originally, the game was made for a game jam in which it was a 4-player digital board game. I then turned it into a single-player game using a mechanic from Tann's Hexcity.

Now it goes full circle, and I have reimplemented the original game in Kangaroo. It's a tile-placement bidding game, and although simple, it's pretty good fun! 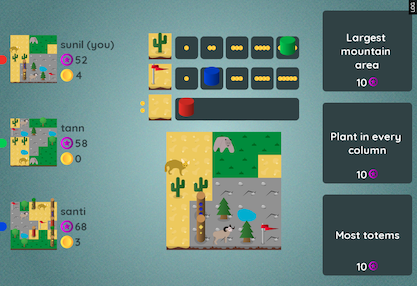 The game consists of 25 rounds. In each round, players bid on the tiles in the marketplace and then place whichever tile they purchased onto their board. Once the boards are full, the game ends, and the player with the most points wins. 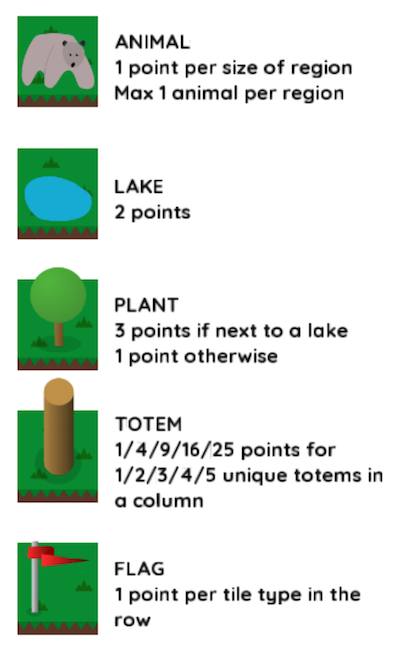 Note that you can click and hold on a tile in the marketplace to see what it does.

In order, each player places a bid or passes.

To pass, place your pawn on the bottom row in the marketplace. There is no limit to the number of players which can pass. It costs no coins to pass, but you receive two coins and a blank tile. Once you have passed, you cannot place a bid later in the round.

To bid, place your pawn on one of the slots in the same row as the tile you wish to bid for. The number of coins on the slot is the size of the bid. You can outbid another player by placing a higher bid.

If you have been outbid, you can place another bid (for the same or a different tile) or pass.

Once all players have either passed, or have bid without being outbid, players spend/gain the appropriate amount of coins and we move to the placement phase.

Each player simultaneously places the tile their just acquired on their board, scoring points as appropriate.

Once the 25th tile has been placed, the achievements are scored.

In the case of a tie for an achievement, all tying players score the full points.

The player with the most points wins. In the case of a tie, players share victory.