Although I have read a couple French novels as part of an educational requirement, I had never read a foreign-language novel for pleasure until now. I have just finished reading "El Príncipe de la Niebla", a small teenage fiction novel by esteemed Spanish writer Carlos Ruis Zafón. His first novel, in fact. 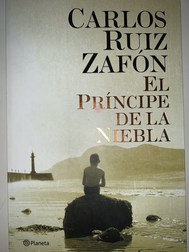 There were plenty of words I didn't know, but they did not impede my ability to follow the plot. And for sure, I learnt a lot of vocabulary along the way. It's an exciting milestone in my Spanish-learning journey, and I am looking forward to enjoying more Spanish books in the future.

Whilst reading this book, I found myself thinking that the sentences were far longer than what I would have expected in an English-language novel. This is a thought which had already been growing based on other snippets of Spanish fiction I had encountered. However, am I right? Could this just be a stylistic choice of the author, or is there a real difference in average sentence length in Spanish compared to English?

Here's an example lengthy sentence from the first page of the book:

Let's look at some original texts. It's difficult to find the texts of novels, so instead I took three recent articles from different authors from an English and Spanish newspaper. A more exhaustive approach would be interesting, across more newspapers and languages, but I don't have the patience (yet).

That seems fairly conclusive! Yes, Spanish sentences do tend to be longer. Even the titles of the articles appear to be more consise in English. I think it's interesting that the makeup of a language is much more than its grammar and vocabulary; there are also different practices and styles.

What other non-grammar non-vocabulary differences are there between Spanish and English, I wonder? Or indeed, between other languages...

I recently read Pride and Prejudice (a book I very much reccomend, by the way), which I also noted as having extraordinarily long sentences for an English book, though I've read very few things that are quite so old.

An example from early on:

"The gentlemen pronounced him to be a fine figure of a man, the ladies declared he was much handsomer than Mr. Bingley, and he was looked at with great admiration for about half the evening, till his manners gave a disgust which turned the tide of his popularity; for he was discovered to be proud; to be above his company, and above being pleased; and not all his large estate in Derbyshire could then save him from having a most forbidding, disagreeable countenance, and being unworthy to be compared with his friend."

Perhaps sentences like that are a little passé in modern English.

(Perhaps sentences with semicolons are cheating?)

Whist reading your article I wondered whether by reading a Spanish book, you had adopted a longer sentence style. I analysed average sentence length of this post in comparison to your recent previous posts, not including bullet points or quotations.