After dallying with various domains (twistedduck.com, alphabetagamer.com, z-fox.com), xikka.com has been my domain since 20th April 2011. It's about time I update the site a little!

As much as I liked the simplicity of my old site, I have wanted to redesign it for a while. Well, a while has come around and I've settled on a new look. It's still simple, but now I've got a blog! I'm hoping to write posts about the things that interest me, with the vague goal of improving my ability to write clearly. Let's see how this pans out... 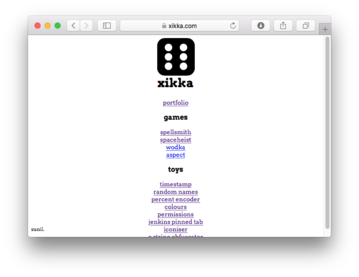 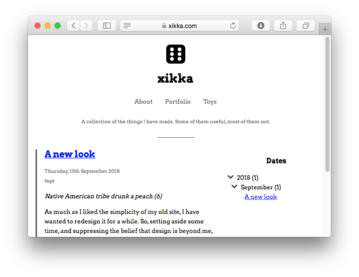 For templating, I have opted for Haml. I discovered it recently and it really clicked with me. It's clear, readable and looks nothing like JSP. Win, win, win! Even just comparing it to basic HTML, my brain finds Haml much easier to scan.

I'm writing the blog posts with Markdown, of which I'm a big fan. I've made some modifications to Parsedown (the PHP engine I'm using to convert to HTML) to allow me to add figure headings on the images, for example. The markdown and haml versions of the posts are available too. It's not very useful, but one of the reasons I like Markdown is the ease with which it can be read as plaintext.

The rest is pretty standard fare. One can always rely on the trusty LAMP stack!