Finishing a game brings with it a relaxing wave of calm. My evenings will once again be free, I think. No longer will I fret over a list of remaining features, I muse.

Oh, how naïve. Of course the relaxation lasts all but five minutes before I am already excited about the next game I want to make.

I have a few ideas I want to probe at, and I've been trying to make some prototypes of the games first. In one case, the game is fun and I already want to play it. In the other, the game needs some work.

For a boardgame creation day a few years ago, I made a game which I was really pleased with. I gave it some generic fantasy name like For Crown and Cross, but a friend dubbed it the much improved Hex and the City. It's a good name: there are powerful hexes in the game, and you have to improve your knights by shopping around the city.

After finishing with the shopping, you have to roam the forests to defeat monsters menacing the villagers. This involved a combat system which felt like a nice puzzle, in a similar way to Mage Knight, only somewhat less complex. I made a prototype for turning this combat portion of the game into a standalone single-player adventure.

I will survive this combat, but am about to sustain some injuries!

The prototype was pretty fun. I think it has potential as a mobile game, so I'm going to work on this, and my partner is going to draw some nice weapons for the game.

I really enjoy it when games take well known concepts to the next level, with a bit of extra "juice". One of the example projects I made in Kangaroo is Noughts and Crosses, and although the original game is boring and solved, I think it has the potential for a makeover. 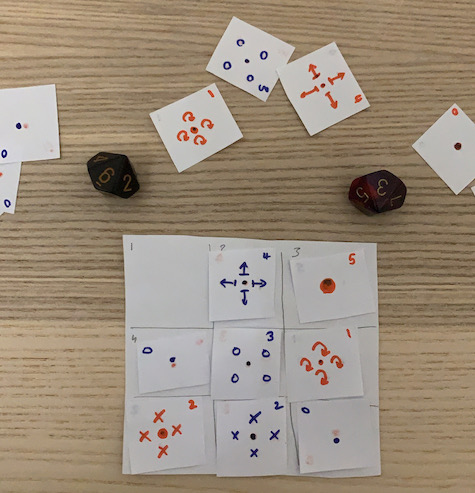 In my reimagining, each player has a series of stones numbered from 1-5, and an infinite supply of stones numbered 0. Simultaneously, each player selects a stone and a position on the board. If two players select the same location, the lower number withdraws to the hand, and only the higher number may place the stone. Stones 1-4 have special abilities, with the 1 being more powerful than the 4. Stone 5 has no ability, but is strong by virtue of its number.

We played a couple of times - it was fun and tense, but it needs some work. There is a possibility of this becoming a game, but I'm going to shelve this until an idea hits me.