The kind of games I most appreciate are also the hardest to find: little games made by hobbyist developers. My favourite moments come when I feel I have connected somehow with the person who made the game. Perhaps I've discovered some hidden feature they planted in the game, or maybe the game appeals to a specific interest of mine. A game designed to attract a large number of players is unlikely to be able to scratch that very specific itch.

Flash games essentially embody this for me, so it's downfall does bring a tear to my eye. I played so many little games on Newgrounds and Kongregate, and created my fair share too. The sites may still be alive, but somehow the games don't feel the same. But maybe that's just my old age preventing me from being able to connect with them...

That said, I do still come across little beauties from time to time, and I'd like to share three of my favourite "hidden gems". They have love and care in them, and explore interesting concepts. And, they are free, so you should go try them out!

Heroes of Camlann by Benjamin Soulé 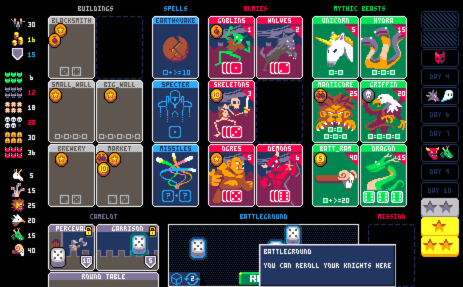 Questing for the Graal

Heroes of Camlann is a brilliantly crafted RPG wrapping a Yahtzee skeleton. The retheming is so elegantly done that although the core gameplay is incredibly similar, the game feels unrecognisable and so much more engaging than the original.

When I first encountered this game, I stayed up all night until I managed to beat the game on its hardest difficulty. In Yahtzee, you must assign your dice into a category every turn, earning points for that category. In Camlann, you use dice to destroy enemies; for example, the 1s category is Yahtzee is rethemed as attacking goblins! Enemies you don't manage to destroy will attack your population - and if you are left with no population, you lose.

I really enjoyed working out how the game works bit by bit, and new features are added at later difficulties giving the game a hefty boost of replayability...

Camlann has inspired me to try and make an RPG version of classic game myself, but that will certainly not be something I manage to finish this year. 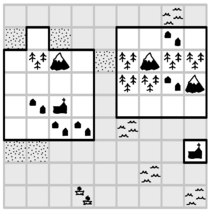 In Tiny Islands, you create three islands (or fewer, technically). It is a game of two tasks: you have to place tiles around the map, and you have to draw the boundaries of your islands. You need to take into account the different scoring rules for each tile as you place it, and make sure you can draw sensible boundaries. You don't want to end up with trees in the sea, or boats on an island!

When placing tiles, you get shown two options. Each option consists of a tile and a set of possible locations. Once you pick one of the options, you must place the given tile on one of the possible locations. This is a really elegant way of constraining the player and stopping them from placing every tile in the perfect location.

David King also has a cool blog where you can see some of the physical games he's made, including a version of Tiny Islands.

This game stuck out to me as it reminds me of the game I made for the Small World game jam, and it could even have been a fitting entry! The problem of needing to impose constraints on tile placement is one I faced when making a single player version of my game, and I think the solution used in Tiny Islands would have suited me well. Too late now! 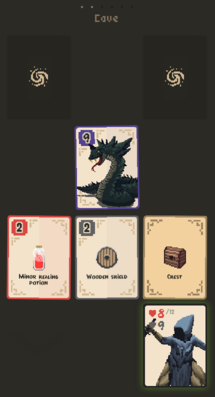 I see a basilisk in my future

Forward is an exciting yet simple dungeon crawler. I like how the game feels tense despite you chosing between at most three options each turn.

When I was at secondary school, a friend and I used to try and make rpgs with a deck of cards: diamonds were currency, clubs were weapons, hearts were health, and spades were monsters. For me, this game evokes the same feeling, but it works much better than the games me and my friend would make!