I often come across a pun in English which I suspect can't work well in other languages. Some of my favourites come from Magic: the Gathering. For example, "Hex" is a spell which destroys six creatures, from: 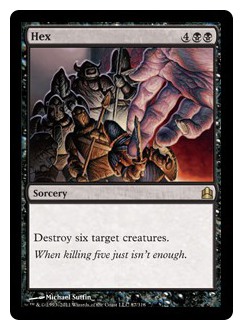 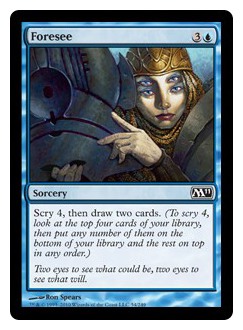 "Foresee" is a spell which lets you predict the future, and see four cards. The subtelty of these two puns is just delightful.

How can this work in other languages? Let's have a look at the translations into Romance languages:

In all these cases, the pun has been removed.

This doesn't mean that a translation is necessarily less rich than the source, however. A translator might be forced to lose a pun in one instance, but may be able to introduce one in another. The addition of puns where they don't exist in the original is where things get particularly exciting!

Here are a couple of examples I have had shown to me recently:

One of my favourite translations is the Adventure Time character Cinnamon Bun. The Spanish name is Don Polvorón. This choice is very interesting because cinnamon buns are not a thing in Spain and a name like Bollo de Canela would have been utterly confusing for the Spanish audience; on the other hand, Don Polvorón is immediately recognisable and very very funny sounding (and the drawing of Cinnamon Bun could easily be mistaken by that of a polvorón!).

Another Magic example: the new three-colour lands in Ikoria are called Triomes. Very clever naming, playing on the supposed bi- prefix of "biome", although biome of course comes from bio (meaning life). I really like fake etymologies like this one.