Now being without job, I want to enter a couple of game jams this year. My first submission is to 7DRL, a yearly jam in which the goal is to create a roguelike game in 7 days. My game, Escorial, is complete, and you can play it over at itch:

I'm really happy with the results, especially given I was only able to work on the game for 5 of the 7 days. The game is a Broughlike, that is following the style of the games of Michael Brough (who is probably the best game designer there is). Go give it a play, and good luck. Warning: it is quite difficult to score highly...

For the first two days of the jam, me and my boyfriend had a pre-planned trip to El Escorial, a town near where we live. The town is home to an impressive monastery which in the past served as the residence to the King of Spain. As a memento to that trip, I decided to base my submission (loosely) on that monastery.

On the whole, I'm really pleased with the game. Each level feels like a little puzzle: how can you unfurl and collect a banner, without taking any damage? The aim is usually to kill as few enemies as possible, and hightail it to the exit!

The scoring mechanic is a bit weird, and would feel more at home in a board game than a computer game. I tend to feel a bit frustrated that after playing for a good stint, I only manage to accumulate a tiny handful of points. That said, it's weird, and I like weird.

The major thing I wanted to include but didn't manage to are major secrets. I had planned secret levels, hidden dragons and collectible relics. Alas, I will have to wait for next year for that!

There is a lot more I could improve if I continued to work on the game, but I think I am happy to leave this one as it is for now. Give it a play and let me know what you think...

I've been struggling with finding a suitable framework for making games. I was finding LibGDX a bit clunky, and compiling to HTML5 and mobile is such a pain. I used this game jam to seriously try out a major contender: PIXI.js. As a framework, it already scores major brownie points with me because it uses the same API that Flash used to, back in the day.

I'd used it before, but I found the lack of strict typing a major setback. However, v5.0.0 (which came out in 2019) introduced type information for Typescript, so I thought it was worth giving that a go. And wow. Using Typescript was a dream. It has all the advantages which come with strict typing (autocompletion, avoiding stupid errors), but the deployment and testing is so quick. 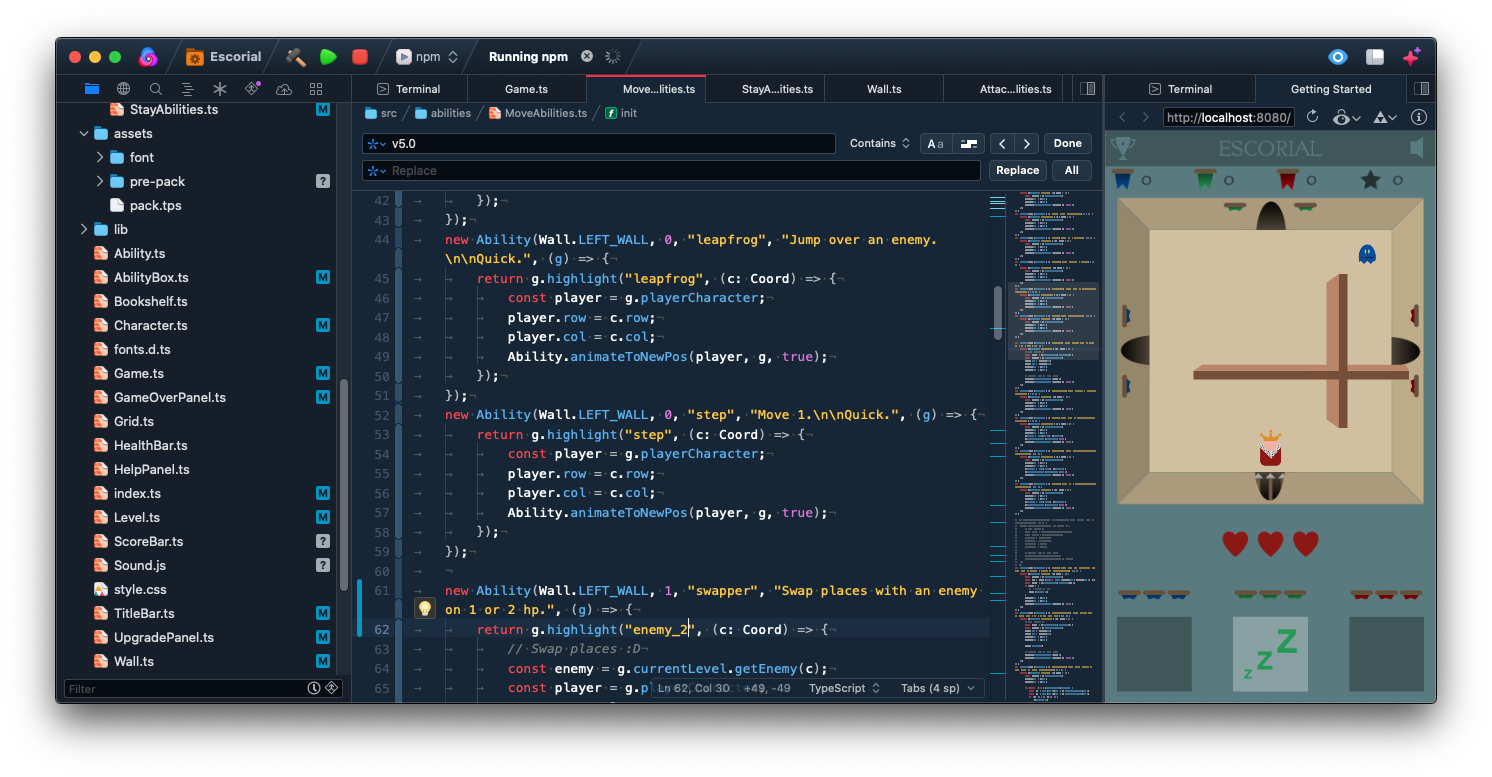 Upon making changes in my editor, the game would auto-update immediately, thanks to webpack-dev-server.

I haven't tried deploying to mobile, yet, but the game runs well in the browser on mobile, so I don't see why it wouldn't work when packaged as an app too.

I will be sticking with PIXI.js + Typescript for all my game projects for a while. I'm thrilled to have found a framework which suits me so well, so regardless of how well Escorial turned out, this is an excellent result!

I have been pleasantly surprised at how well people have taken to the game. This leads me to revise my previous thoughts of leaving the game alone. I will probably try to turn the game into a mobile app. Here are some of the mentions:

Very nice game. Do you have any plans to publish this game on iOS?